How To Do CPR For Infants In An Emergency 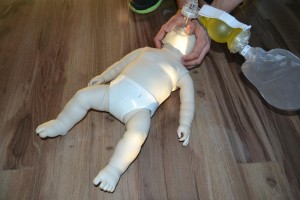 Infant CPR is not that different from adult CPR

Cardiopulmonary resuscitation also known as CPR during emergency is a skill and technique that is of great significance among the human race. In millions of cases, CPR has helped save many lives. Mostly applied to adults, CPR can also be used to save the lives of an infant too. However, most people stay away from CPR for infants as it requires more details to execute. Infants by themselves are pretty delicate and the process of CPR needs to be handled carefully during emergency cases otherwise, it might harm them further.

It is a nightmare to have to be in a position to perform CPR to a infant when emergency calls for it, however, unknown circumstances can lead to such a situation. To be prepared for such a predicament, one needs to understand the basics of CPR performed on infants. This article seeks to explain the vital steps of CPR to children. However it is advisable for one to take a step further and get proper training on the same and also acquire some practice while at it. The material posted below is for learning purposes only. To learn the correct steps and techniques for CPR enrol in a CPR course today.

Steps of CPR for Infants

For a infant, one should be alarmed if he is conscious but is unable to cough, cry or respond to sound. This could be as a result of a blocked airway.

One needs to first of all check if the baby is conscious. A simple flick on the foot or a gentle tap on the shoulder should help determine the consciousness of the child. One can also call out. If the child does not respond, it is important that the person monitoring him calls for emergency medical assistance. One can have another person make the call while he embarks on the CPR. First, gently turn the baby on his back and let him lie on a flat and firm surface. The person should make sure that the child is not having any serious bleeding. If there is bleeding of a serious kind, then the person should make effort to stop the bleeding. CPR should not commence until the bleeding is stopped.

Use one hand to tilt the baby’s head back and use the other hand to lift the chin slightly. Ensure that the head is not tilted too far back. Once the head is tilted back and the airways open, try to feel the breathing of the child. The checking of the breathing signs should not last more than ten seconds. Checking of breathing signs in children is done by putting your head next to the mouth and turning your face to look towards the feet. In this position, one is able to see if the chest is rising and falling in a breathing pattern and also listen for the breathing sounds. If there is breathing, it can be felt by the person on his neck.

If the person discovers that the child is not breathing, he should give to the child two little breaths. These should last roughly a second each. Then you cover the child’s mouth with yours and then exhale into his lungs until his chest rises. There should be pauses between the rescue breaths to allow air to flow back out. The lungs of the child are smaller than that of the adult performing the CPR therefore he should note that he doesn’t exhale his full breath into the child’s lung.

While still in the lying position, one should place two fingers at the center of the child’s chest and then compress the chest to about one and a half inches. This is pushed down and the compressions need to be smooth. Jerky compressions can harm the baby. The compressions should be thirty at the average rate of one hundred compressions per minute. After the thirty compressions, two rescue breaths should be given as described above.