You Are Here: Home » Uncategorized » Treating Kids With Ear Problems

Those who are the most prone to middle ear infections, otherwise known as “otitis media,” are babies and young children. This condition involves either fluid or pus building up behind the ear drum and inside the ear canal itself, which can cause either deafness or pain. Oftentimes with this condition, the ear drum can burst, which can cause the fluid to be released. As a result, the child suffering from it will end up feeling better, as the burst ear drum will end up healing on its own. 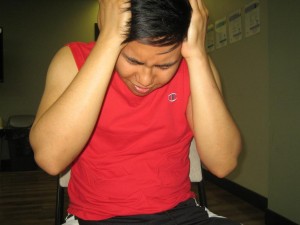 Those who are the most prone to middle ear infections, otherwise known as “otitis media,” are babies and young children.

Even though many ear infections tend to heal up on their own, doctors prefer to treat infections that turn out to be much more serious in nature.

Approximately four out of five children will get a middle ear infection at least once during the course of their lifetime. Some of the most common symptoms of this condition include the following:

Whenever fluid is present in the ear, sound never travels well through it. This means that if a child is suffering from an ear infection, they will likely have hearing difficulties of some sort. In other words, normal speech may sound more like a whisper to them. However, this can only last for as long as the infection itself lasts, and there is no real link to any kind of permanent hearing loss. On the other hand, if an ear infection is more constant in nature, it can delay a child’s speech development solely because of the fact that they are unable to hear very well.

A middle ear infection can be caused by either a virus or bacteria, and can also be triggered by a cold. Babies can also develop these due to the fact that they are still building up their immune systems. When a child reaches the age of six, however, these types of infections become less common due to the tube connecting the nose to the ear becoming fully mature.

You will be able to reduce the risk of suffering a middle ear infection by taking the following precautions:

*Limiting exposure to other children
*Breastfeeding
*Not smoking

Infections that are more mild are able to clear themselves up in the span of a few hours. You can also use over-the-counter medications to help a child feel better as well. In a more severe case, you may have to resort to using antibiotics or ear drops.

This is a condition that involves the ear filling up with thick fluid, and this can develop following a double ear infection. In the event that antibiotics aren’t able to remedy the issue, then an operation may be necessary. This involves making a small hole and inserting a small tube, also known as a grommet, to help drain out all of the fluid. There are some cases where a strong antibiotic may help as well. Furthermore, as a child gets older, cases of glue ear become less common.